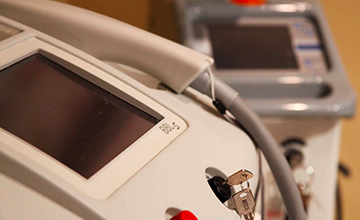 To use an analogy related to driver’s ed, “We teach how to drive a car, and not just how to drive a Chevy.” When I was in driver’s ed I drove a 1972 Vega, not many of those around anymore… It would have been really bad if that was the only car I knew how to operate.  Rocky Mountain Laser College teaches how to perform the procedures of laser hair removal, laser tattoo removaland laser skin rejuvenation. When a graduate leaves, they are proficient in these services and can walk up to any laser; with a little time learning the buttons become an expert on that device. All the physics, theory, contraindications and everything else is the same for all hair, tat or skin lasers.

But what about lasers? Are they all the same? Will one laser work on everything? These are all very good questions that we go over in class. When a graduate is on their own and a laser salesman is filling their ear, how do they know what is real and what is hype? As I always say in class, the best laser to buy is the laser that NEVER breaks! Wouldn’t that be the best car to buy, the one that was never in the shop? That’s not really possible because cars and lasers both break. So the next best laser to buy is the laser that “does what the manufacturer claims.” Seems simple, but it’s a big task. If you are opening a spa and want to do laser hair removal, your laser had better do a good job at it! But what if you want to expand and get into skin rejuvenation, will a hair removal laser tighten skin like the salesman said it would?

That’s where your schooling at Rocky Mountain Laser College comes in. Remember that lasers fire a single wavelength…an Nd:YAG fires 1064nm; an Alexandrite fires 755nm, a Co2 fires 10,600nm and so on. Each wavelength is attracted to a specific chromophore (what we call the target). So a 755nm wavelength that is highly attracted to melanin will be great to destroy a sunspot on a light skinned client, but will be very bad to use for hair removal on a dark skinned client because it will take the color out of their skin! So why do salesmen claim their device can “Do it all?” Well, they may just want to take your money, or they may not know the difference because they have never used the laser. That’s right, most manufacturers do not allow their salesmen to fire a laser. Would you take advice on how well a car drives from a salesman who has never driven a car? Hmm…

We had a RMLC graduate who bought a laser before she came to school “that did everything.” Hair removal, tattoo removal, skin rejuvenation… everything. Being the skeptical person that I am, we pulled out the owner’s manual and got into the physics of the device and here is what we found out. It was a Q-Switched, Nd:YAG that fired 1064nm in the nanosecond pulse duration PLUS an intense pulsed light handpiece. So, going back to our physics the Q-Switched Nd:YAG is good for tattoo removal for black ink only. The IPL handpiece may work for hair removal and it is great for sun and age spots and some skin tightening, but only for light skin types. So, was the manufacturer lying when they said it can do everything? It did hair removal, it did tattoo removal and it did skin rejuvenation. Well, this graduate was starting a laser hair removal spa on the island nation of Trinidad where 95% of the population is skin type 5 and 6. A Q-Switched Nd:YAG is useless on hair removal period and an IPL is useless for ANYTHING on skin types 5 and 6. So did the manufacturer lie about what the machine did? The short answer is no, however the device is totally useless to our graduate. This is just one of many examples like this. Do not just listen to the salesperson because many of them are not trained. But a graduate at RMLC is able to analyze the fine print and determine what a laser is really capable off.

This site uses Akismet to reduce spam. Learn how your comment data is processed.